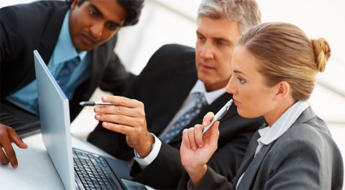 Career Professionals, Inc. has been serving the professional and technical staffing needs of southeastern manufacturers since 1985

Roni joined Career Professionals, Inc. in July 1999 and became co-owner in May 2004 and full owner in 2015 upon the retirement of her business partner.

She served as the 2014 Chairman of the Board for the Morristown Area Chamber of Commerce.

In October 2015, Roni was appointed the the Labor, Education and Health Advisory Council for the Federal Reserve Bank in Atlanta. This Advisory Council is comprised of education and industry leaders to provide valuable insight and advice on matters related to the labor force and workforce development.

She is a past Board President of Girls Inc. and is also active in the United Way of Hamblen County. Roni received her Masters Degree in Educational Psychology from Tennessee Technological University in 1996.

Mike is involved in everything from handling the switchboard, to applicant screening, to updating profiles, doing correspondence, and client research. More than likely, you will talk to him when you call our office or correspond through e-mail. He has a BS in Graphic Design and has spent 40 years in the Advertising Industry as an Art Director / Creative Director / Director of Advertising. Mike is also heavily involved in the Knights of Columbus charitable works at the State level as well as the Lakeway Area Habitat for Humanity. He also enjoys motorcycling, camping, gardening, and art.

Steve joined CPI in 1996 and became co-owner in May 2004 upon retirement of company founder, Jim Beelaert. Steve received an MBA from Indiana University and has a BA degree from the University of Evansville in Indiana. The first 25 years of his career was spent in the healthcare industry, where he served as Executive Director / Hospital Administrator for hospitals in Alabama, Texas, and Tennessee. After a successful 19 years at CPI, Steve retired April 2015.

He is still active in community affairs and has served as the President of the local Chamber of Commerce, and President and Campaign Chairman of the United Way, and Board Chairman of the Lakeway Achievement Center and the Sutherland-Metz Group Home.

Jim started Career Professionals in 1985 and built it into one of the most respected search firms in the Southeast. His approach was based on respect, integrity, and professionalism, which remain the core pillars of the company today. Jim retired from the recruiting business in May 2004, but still remains very active in other business ventures.